Phase 1 is COMPLETE!
﻿Join the Movement﻿ by making a donation towards Phase 2, a world-premiere in San Francisco 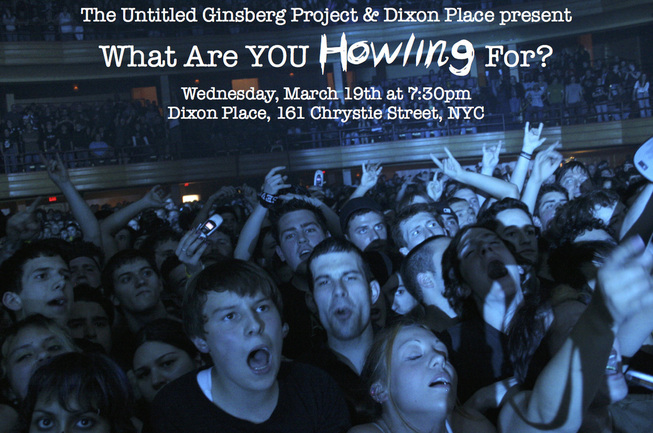 ﻿﻿Click the photo above for more info﻿﻿
INTERVIEW WITH DIRECTOR, JOSHUA W. KELLEY
Featured on "Ask A Director"


Hometown?
I grew up in a small town along the Chesapeake Bay: Havre de Grace, MD.
Not nearly as fancy as the name implies. But the best seafood ever. EVER.

Where are you now?
Living and working in NYC. I’m an Astoria kind of guy!

What’s your current project?
I’m lucky enough to be working on my passion project right now: The Untitled Ginsberg Project. It’s a multimedia theatrical response to Allen Ginsberg’s groundbreaking poem “Howl.” Our team is aiming to collaboratively generate a visceral, imagistic event that will give shape and form to that incorporeal cry you can feel pulsating through your body as Allen’s language, rhythms, and imagery consume you. On that infamous night in 1955, Ginsberg got up on stage at the Six Gallery in San Francisco and unleashed the American Scream that he and his young friends had been forced to silence ever since their paths crossed on Morningside Heights in NYC in the 1940s. This cry is still palpable in 21st Century America, and it feels like it is again time to let the world hear our howl.

Why and how did you get into theatre?
When I was a kid, I told my parents that I wanted to be a preacher when I grew up – a bizarre aspiration for any 7 year old. And even though I am descended from a long line of strict Irish Catholic immigrants who called themselves the O’Kelley family, we had dropped the “O” and loosened up a bit, transforming into half-hearted Episcopalians by the time I was born. Nonetheless, I looked forward to every Sunday morning and would drag my parents out of bed to take me to church. Eventually, I became a dedicated and over-enthused altar boy. I loved putting on the robes, performing the rituals, and participating in the spectacle of it all. Needless to say, I was positively thrilled when I was cast as a shepherd in our church’s annual Christmas pageant. For a long time, I thought it was my daily viewing of The Wizard of Oz, and my dressing up as the Wicked Witch of the West for Halloween that sparked my interest in theatre. But as I get older, it’s becoming clear that my early participation in organized religion and the suburban equivalent to liturgical drama is what truly sparked my passion for theatrical storytelling. It was never the doctrine that interested me, but the sense of community, of being a part of something bigger than myself, and the telling of transcendent stories that transformed people’s lives.

What is your directing dream project?
Well - somehow - Ali Skye Bennet (my Artistic Producer / partner-in-crime) and I cultivated a stellar team of administrators and artists who are all going to be joining us on this ambitious journey to finally bring my dream project to life! So I guess I need a new dream project now? There are a few plays that I am dying to get my hands on - but Mike Bartlett’s Contractions is at the top of my list. Really, I am itching to tackle mostly anything that Mr. Bartlett has written - he has got to be the most exciting living playwright we have right now!

What do you want to change about theatre today?
More government subsidies. It’s a complicated issue - but that’s the long and the short of it.

What is your opinion on getting a directing MFA?
I think there are a million different paths to get to the same destination. If the MFA route is right for you - go for it! If not, don’t. Robert Wilson didn’t have any formal theatrical training - undergraduate or graduate level. Every artist is different - the biggest favor you can do yourself is to figure out what it is you need to do to make the kind of art you want to see in the world.

Who are your theatrical heroes?
In terms of directors, Alex Timbers, James Macdonald, and Jack Cummings III take the cake. But I’m also really inspired by John Doyle, Pam MacKinnon, and Robert Wilson.

Any advice for directors just starting out?
Read “Steal Like an Artist: 10 Things Nobody Told You About Being Creative” by Austin Kleon. Then watch this: http://www.youtube.com/watch?v=3ResTHKVxf4.